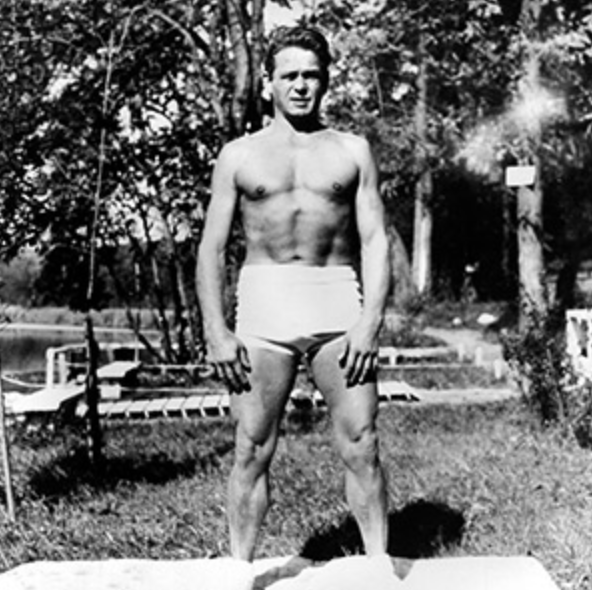 Joseph Pilates was a very colourful character and has some entertaining points you’ll find interesting. Keep reading below as you might be surprised by a few!

If you are a member of my classes or have ever tried Pilates, then you might be interested to know the man behind your movement practice–Joseph Pilates. (I sometimes refer to him as “Joe” as if we are old friends!)

The history of Pilates is largely credited to Joseph Pilates. As a young man, he was a boxer and skier who moved to America in 1926. There, he opened a studio that trained dancers and athletes before passing down his exercises to disciples. He is definitely responsible for the fact that we can practice Pilates today!

Joseph Pilates was born in 1883 in Germany. He suffered from many health problems in his youth which included asthma, rheumatic fever and rickets. This may explain why he developed an interest in human anatomy.

Prior to becoming a Pilates Instructor he was a boxer and in 1912 moved to Englad to further his boxing career. During World War I he spent time in an internment camp with other German citizens of England. To help pass the time he taught his fellow inmates wrestling and self defense. It was here where he started to develop the original Pilates mat work exercises we now call “Contrology” and the Principles of Pilates. He eventually moved back to Germany where he used his Contrology exercises to train military police as well as boxers.

It wasn’t until the 1920s when Joseph Pilates emigrated to the USA where, with his wife Clara, he started teaching the Pilates method in their ‘body-conditioning gym’ in New York city. It was here that the dancing community fell in love with Pilates for its injury prevention and rehabilitation.

Pilates has evolved since the 1920s and we now focus more on modern day bio-mechanical movements. However you will find some of the original Contrology exercises in many modern day Pilates classes.

In addition to having a keen interest in physical conditioning he was known for having some insightful words, including:

“A man is as young as his spinal column.”

“We retire too early and we die too young. Our prime of life should be in the 70’s and old age should not come until we are almost 100.”

“A few well-designed movements, properly performed in a balanced sequence, are worth hours of sloppy calisthenics or forced contortion.”

Unfortunately Joseph Pilates passed away before ever seeing Pilates gain worldwide recognition. Ultimately we have him to thank for this exercise practice that millions of people around the world have adopted. Regardless of your age people have come to love Pilates for the immense benefits it offers!

Pilates is a practice that has been passed down from generation to generation. When Joseph Pilates first began teaching his exercises, he had no idea how far they would spread or how many people would be practicing them today. Of course it’s not just the movements themselves that are important – it’s also the philosophy behind them. This is where Joe really shines as a teacher; he knew how important it was for people to not only understand their bodies but also why they should care about their health and wellness at all levels: physical, mental/emotional and spiritual.

We often forget that what we do each day has an effect on us physically and mentally; when we exercise regularly with proper form (which Joe helped develop), we’re strengthening our bodies while challenging our minds by focusing on technique instead of just going through the movements on autopilot.

Joseph Pilates was a great innovator, teacher, and his work is responsible for the fact that we can practice Pilates today. So cheers to Joseph Pilates–his work lives on in our movements patterns both on and off the mat.

Christine Kirkland is a Certified Pilates Instructor offering online Pilates classes. She specializes in helping adults to increase their balance, strength, mobility and feel their best every day. Sign up for the newsletter which is jam packed full of fitness tips and advice for seniors, bonus freebies and subscriber exclusives by clicking here.

The Women’s Health Big Book of Pilates By Brooke Sil